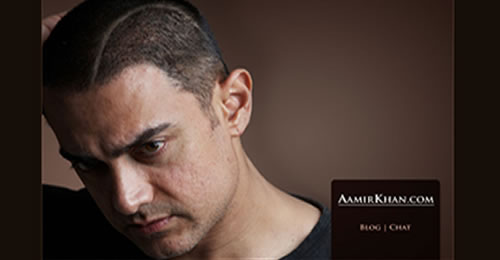 I recently wrote about the blogging boom in Asia. It is a report on a panel discussion on blogging in the region organised by IDC in Singapore the last week. Click on the link and you can read the report.

In this post, I want to talk about blogging by Bollywood’s celebrities.

Do you know of any Hollywood biggie who blogs? I have never heard of the likes of Tom Cruise or Robert De Niro blogging.

But turn to Bollywood and you would be surprised to see how many big Bollywood actors and filmmakers have taken to blogging.

In this case, Bollywood has adopted Web 2.0 with great alacrity.

Top actor Aamir Khan has been blogging for some time. He has been doing it quite successfully, with thousands of his fans interacting with him online. This was an important development as Aamir is seen as a very sensitive person–he is not your normal Bollywood actor and yet he is one of the top 3 actors of Bollywood: he largely stays away from the mainstream and film gossip media, does one or two films a year and completely avoids all kinds of Indian film functions (he is okay with the Oscars though).

Recently, India’s most respected actor Amitabh Bachchan also took to blogging (he is 60 plus, mind you). It made quite a splash in the media. I checked his blog yesterday and he had received more than 800 comments on his latest post.

Even Bollywood’s reigning superstar has got a blog. Shahrukh Khan blogs on Intentblog.com but some have expressed doubts if he does his own blogging. SRK, as he is lovingly known, is a tech savvy guy and was one of the earliest Bollywood personalities to have started a web portal. He wrapped up this venture after his home production, Asoka, bombed on the box office.

Among directors, on top of my list is director Shekhar Kapur, who sort of straddles between Hollywood and Bollywood. His blog is as much about cinema as about life, death, mythology, spirituality, etc. It’s a great read.

There are a lot of younger generation Bollywood directors and writers who blog in a blogging community, Passion For Cinema, led by director Anurag Kashyap.

All these blogs are helping these film personalities directly connect with their fans all over the world. Lets them have direct feedback from them. Not only that, they can also clarify baseless rumours in trade magazines and MSM which is the staple of film journalism. Things..they are a’changing!

Can ‘Green IT’ help save the planet?

Yesterday was the Earth Day and most newspapers and magazines around the world ran stories on climate change. We also ran some green IT related stories on our websites. I have provided links to a few of them at the bottom of this post.

Needless to say that climate change has become an irrefutable truth, however inconvenient.

Many writers, including scientists, economists, and commentators of all colours are pondering over the issue. While I was searching for stories on climate change, I came across this brilliant article in the New York Times, Why Bother? by Michael Pollan.

It makes some pertinent points; asks us to do something about it. In this connection, I want to ask what role ‘Green IT’ can play in containing this global crisis?

Is ‘Green IT’ just a fanciful term or can it actually make a difference?

But more about it a little later. First, let me summarise what I think about the climate change crisis.

Call me an alarmist but in my view, the way the climate is changing (rising temperatures, melting of the polar ice and rising sea levels) and the impact we are seeing on the global food production patterns (droughts causing a food crisis: for example, 98% of rice production in Australia has failed this year) is nothing short of a calamity. I think we are already into the third world war.

An expert recently said in a report in a Singapore newspaper that the food crisis is more dangerous than terrorism!

An economist, the managing director general of ADB Mr Rajat Nag cites many reasons, mostly economic and policy-related, to the current food crisis: World rice prices have surged, not only because stocks have hit their lowest level in decades, but also because of growing disposable incomes, high fuel prices driving production costs, erratic weather and stagnant yields. The era of cheap food is over, he said.

The Economist calls the current food crisis the silent tsunami, and it has some figues to support its claim.

Whatever epithet you give to the phenomenon, the question is: If the problem is so grave, what are we doing about it (compared to what we are doing about terrorism)?

We are conducting our lives as if nothing has happened. We think it is business as usual.

Look anywhere around yourself. People are increasing their carbon footrints. Evermore number of people are travelling in jets (Travelling has become so plebian, Naipaul has said).

In the developing economies, as the ranks of the middle class are increasing, people are eating more meat (it takes 7 kgs of vegetable to produce 1 kg of meat) and buying more cars, burning more fossil fuels. Tata’s Nano car, for instance, will contribute to it in India.

Even developed countries are adding to their energy consumption bills. A small country like Singapore, for example, has increased its electricity consumption by 78% between 1995 and 2007. The reason: Greater ownership of electronic appliances and gadgets. In 1998, about 58% of households owned an air-conditioner compared to 72% in 2003.

The people in the developing countries say, those who had never tasted the pleasure of creature comforts, never owned a car before, never had a lavish lifestyle (conspicuous consumption) before will complain:  Now that it is my turn to have fun, you are talking about climate change! I don’t give a damn. Let me have my fun. Don’t spoil it!

Fair enough, one could say—but only for historical reasons.  What about the future that is common for us all? In other words, is black smoke white man’s burden?

Does it mean the onus of bringing the earth temperatures down lies with the people of the developed world alone? Is global warming just a first world problem?

People in the developed countries are aware of this expectation but will this realisation save any trees. Pollan in his NYT piece puts it across so succintly:

Let’s say I do bother, big time. I turn my life upside-down, start biking to work, plant a big garden, turn down the thermostat so low I need the Jimmy Carter signature cardigan, forsake the clothes dryer for a laundry line across the yard, trade in the station wagon for a hybrid, get off the beef, go completely local. I could theoretically do all that, but what would be the point when I know full well that halfway around the world there lives my evil twin, some carbon-footprint doppelgänger in Shanghai or Chongqing who has just bought his first car (Chinese car ownership is where ours was back in 1918), is eager to swallow every bite of meat I forswear and who’s positively itching to replace every last pound of CO2 I’m struggling no longer to emit. So what exactly would I have to show for all my trouble?

All faiths teach us the lessons of frugality and contentment. Greed creates its own problems and we are seeing the outcome now. How long can we plunder mother earth? Is this ever sustainable?

NYT columnist Paul Krugman, in his recent column, Running Out of Planet to Exploit, asks:

Last week, oil hit $117. It’s not just oil that has defied the complacency of a few years back. Food prices have also soared, as have the prices of basic metals. And the global surge in commodity prices is reviving a question we haven’t heard much since the 1970s: Will limited supplies of natural resources pose an obstacle to future world economic growth?

(I am not even talking about an analyst’s claim in BusinessWeek that the US has been unable or unwilling to regulate oil markets because it is a convenient way to contain the growth of China and spur energy conservation in the country).

So what can be done?

Many things at many levels—personal and institutional, including at the community (NGOs), governmental, and corporate levels.

While the responsible amongst us can change our light bulbs (thanks to Al Gore), use less paper, grow our gardens, eat less meat or travel in public transports, the governments need to intervene with rules as they do while tackling terrorism (most people need to be told to stay in the queue, for example, for the greater common good).

The government can also penlise people for excessive use of energy. Why should petrol be subsidised in some countries to enable people to drive cars? In Singapore, petrol is about $2 a litre, nearly same as a 1 litre bottle of packaged drinking water. Does it make any sense?

Governments and corporates can explore encouraging alternative sources of energy. How about wind power? Solar energy?

Green IT can play a role in all this and more.

As our life is becoming increasingly dependent on technology, my biggest hope is digital nomadism (is it hope or will it be our only choice?).

For an ever-increasing global workforce in a globalised knowledge economy, like it or not, digital nomadism is the emerging reality. Notes the The Economist:

The nomadism now emerging is different from, and involves much more than, merely making journeys. A modern nomad is as likely to be a teenager in Oslo, Tokyo or suburban America as a jet-setting chief executive. He or she may never have left his or her city, stepped into an aeroplane or changed address. Indeed, how far he moves is completely irrelevant. Even if an urban nomad confines himself to a small perimeter, he nonetheless has a new and surprisingly different relationship to time, to place and to other people. “Permanent connectivity, not motion, is the critical thing,” says Manuel Castells, a sociologist at the Annenberg School for Communication, a part of the University of Southern California, Los Angeles.

So, our lives will be connected with the world virtually through ubiquitous wirelessness. We will work but in virtual offices (which means, no office politics!). We will travel but mostly virtually and so on. Imagine, how much Green IT can contribute to building up such a lifestyle?

The challenge is immense. So is the opportunity.

Some Green IT stories:

Green technology: hype or must-have?
It’s enough to make some IT managers dismiss green technology altogether, but even those who are concerned about the environment and their own energy costs have a tough time separating product hype from reality.
Jon Brodkin

Saving the environment can’t stop at the data center
IT already contributes substantially to the energy efficiency of organizations, but it could do more.
Simon Mingay

The 5 quickest returns on your green investment
Most companies are talking a good game but not really going green where it counts.
By Darrell Dunn